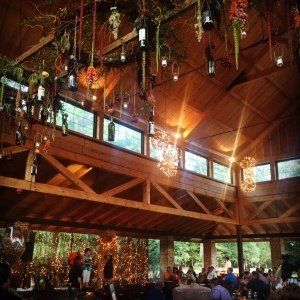 When Southeastern Emergency Equipment hosts a party for its vendors from across the country, they don’t mess around. The wine-themed party boasted not only an over-the-top gorgeous hanging centerpiece mixing florals and wine bottles by English Gardens, but also a cigar rolling station and a s’mores bar.

Though this may have seemed like a grown-up affair, children enjoyed themselves almost as much as their parents. In a fierce game of tag pitting the boys against the girls, they used the historic buildings of The Sutherland to shield themselves from opponents.

The main event of the party was undoubtedly the grape stomping competition. Though it took some coaxing at first to gather enough teams to make five heats, once the stomping began, some seemed surprised by their own competitiveness.

Participants soon learned that four minutes in grape stomping time is a lifetime. Something that they envisioned required little effort left a couple stompers laying on the floor after their time was up.

Stomping grapes was not only challenging and downright fun but also an exercise in teambuilding and gaining trust with your partner. One person had to stomp their heart out, but the scraper couldn’t give up on clearing the pathway for the juice either. Both team members were equally as important.

As SEE showed their vendors this week, each member of the team is equally as important as the one sitting next to you, smoking a cigar, drinking some wine, or eating a s’more.